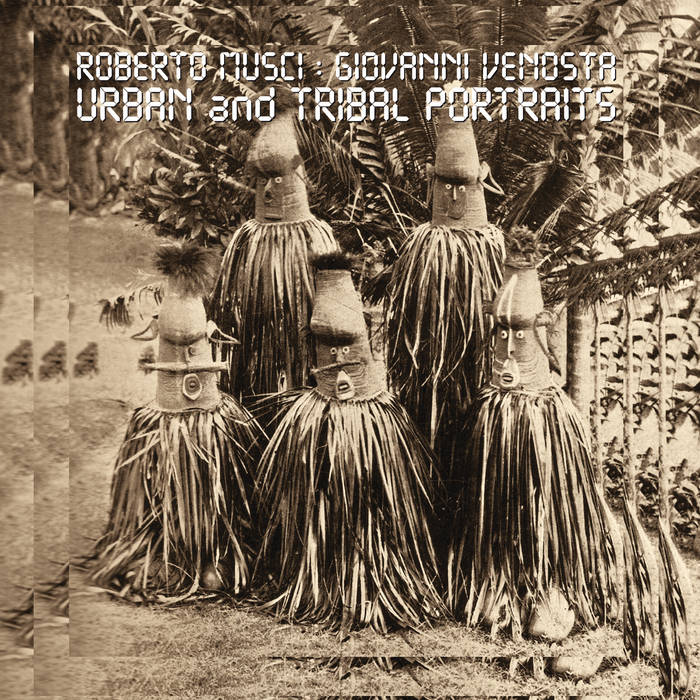 And so, steadily, Roberto Musci’s works are being made available for our listening pleasure. Soave’s edition of ‘the complete sessions’ of The Loa of Music, Musci’s debut album from 1984, is now flanked by Urban and Tribal Portraits, another milestone from 1988, a key collaboration with fellow sidereal world traveler Giovanni Venosta, whose essential and amazing debut album Olympic Signals was also recently repressed. While a number of the recordings that comprise this particular work have been (relatively) available --through a ReR anthology that also included tracks from the other Musci/Venosta collaboration, Water Messages on Desert Sand as well as some integrated in the Music From Memory compilation, Tower of Silence, released under Musci’s name only—this is indeed the first time one can listen to this fundamental work as it was meant to be heard. Not a minor detail for a work that was obviously conceptually and narratively rigorously conceived by Musci and Venosta.
And what a listen it is.
Urban and Tribal Portraits reaffirms the idea of postmodern pastiche as a multimedia multisensory experience and sound as an ecosystem that is both aleatory and concrete, ephemeral and durable. In these binary paradoxes, a radical notion of the nature of collaboration, that is both chance induced and conversely conceptually worked out, is also established. The result is a work that exposes the fixed assumptions about the constructed boundaries and flows between musical traditions and practices. On its own this is the ultimately problematic place where many of the so-called musics concerned with the world reach an impasse, incapable as they are of questioning their own basic assumptions and ultimately end up strengthening those very same boundaries and flows that they had apparently set out to challenge. Musci and Venosta go further, principally and more fundamentally, by picking away at the margins of pure sonorous events and musical material, noise and sonance. In doing so, Urban and Tribal Portraits repoliticizes the notion of pastiche, engaging as it does in a kind of ecopractice, turning the process rather than the musical object into the poetic focus of the work. Fixed categories are rendered ephemeral, temporal and spatial categories including the margins, so hard to overcome, between composition, improvisation, authorship, recordedness and live performance are deconstructed. In the end, where one would expect seriousness there is levity and where one might see some postmodern appropriative ironic juxtaposition there is intensity and respect of the magical organicness of the material sources.
Like much Italian experimental music from that magical decade of the 80s this is not your dad’s fourth world music, with all of its ambiguous aestheticism of ‘unifying’ some not so well defined primitivism of ‘world ethnic styles’ with the futuristic sounds of whatever ‘advanced electronic techniques’ were the platter du jour. In this sound the 8-bits of the E-Mu Emax is as primitive as the Jews Harp while the electronically treated Pygmy chants turn out to be as futuristic as the multi-timbral capacities of the OB-8.
From the funk ostinatos of “El Lamento de Los Ayatollah” where Venosta showcases his straight piano playing to the rarefied queer guitar arpeggios in “Tamatave”, the peaceful ripples in “Dialogue Between a Dreamer and Others”, the playfulness of “Starfish & Kangaroos” or the post-punkish This Heat/Cabaret Voltaire aggression in “The Fear of a Soldier” this is destabilization as praxis, a shifting of the ground. The new cover image, that replaces the ethno patchwork of the original sleeve (beautiful as it was) is indeed more to the point: Sven Hedkin’s photograph of early 20th century Tibetan death masks is at once urban and tribal, surrealist in its uncanniness. Just like in surrealist praxis these sounds offer some kind of redemption: sounds used in alternative ways, distinct from their usual connections, deconstructed. A DIY bricolage: a destructuring of everyday sound objects towards new uses fed by local ecosituated experiences, transformative of performance and listening. Surrealist ‘musicking’ indeed.
-Peter Sarram